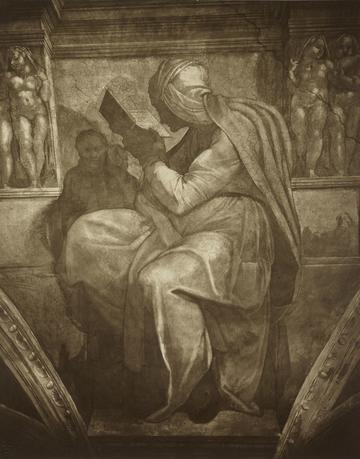 Adolphe Braun (1812-1877) was a French photographer whose studio, Braun et Cie., specialised in the development of landscape pictures and art historical images. The Visual Resources Centre holds a collection of 125 loose mounted photographs (using a carbon printing process) of the Sistine Chapel, taken by Braun and his sons, Henri and Gaston, in 1869. These images meticulously surveyed the frescoes decorating the walls and ceiling of the Sistine Chapel. At the time of their release they constituted the only existing photographic record of the chapel’s interior. These large photographs (37x48 cm) exemplify Braun’s technical abilities in successfully capturing the curved surface of the ceiling.

The photographs are kept in six leather-bound book-shaped cases bearing the crest of the Earl of Eldon. In 1845 and 1868 respectively, the Second and Third Earls of Eldon made considerable donations towards the conservation and enrichment of the University’s collection of Italian art. Braun’s Sistine Chapel series was most likely acquired by the curators of the University Galleries using these funds. They were originally housed in the Ashmolean Library but were moved to the Department in 2003. The boxes were restored the same year and the prints themselves are in good condition. In 2018 work was undertaken to research and digitise the photographs which are now available on Digital Bodleian.

The Department of History of Art would like to thank the John Fell Fund and the Edgar Wind Benefactors Committee for funding the project, and the Bodleian Imaging Service for carrying out the digitisation. Thanks and appreciation also go to Sofia Garré (MSt History of Art and Visual Culture 2018) for her excellent research on the photographs as Project Assistant.

The images are available on Digital Bodleian.

More detailed information about the research can be found in a blog post.