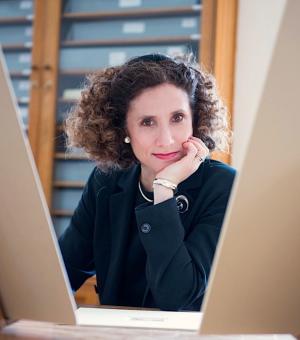 Associate Professor in the History of Art
Christ Church
01865 (2)86836
geraldine.johnson@hoa.ox.ac.uk

Geraldine Johnson received a BA in Comparative Literature from Yale, an MA in Art History from Cambridge, and a PhD in History of Art from Harvard. She has held a number of prestigious grants and fellowships, including ones awarded by the Harvard Society of Fellows, the Leverhulme Trust, Villa i Tatti in Florence, the Henry Moore Foundation, the Fulbright Commission, and the Mellon Foundation. In 2009, she received a University Teaching Prize for her work in establishing Oxford's undergraduate degree in History of Art. She has been an Elected Member of Oxford University's Council, Associate Head of the Humanities Division, and Head of the History of Art Department. She has also held a number of senior positions at her college, Christ Church, including Senior Censor, Junior Censor, and Tutor for Admissions.

She has published widely on the history of sculpture from the late medieval period to the present day, as well as on the visual arts more generally in Early Modern Europe. Her research interests also include the history of photography, the historiography of Art History, and women and the visual arts. Oxford University Press published her Very Short Introduction to Renaissance Art in 2005, with a new edition appearing in 2010 from an imprint of Barnes & Noble. It has been translated into Chinese, Greek, Turkish, Thai and Vietnamese, and a second, revised edition is currently in progress. She is the co-editor of a prize-winning volume entitled Picturing Women in Renaissance and Baroque Italy (Cambridge University Press, 1997) and editor of Sculpture and Photography: Envisioning the Third Dimension (Cambridge University Press, 1998). She is a Series Editor for Renaissance History, Art and Culture, published by Amsterdam University Press, is a member of the Editorial Board of the journal Art History, and is the General Editor of A Cultural History of Sculpture for Bloomsbury Press.

Her articles have appeared in major peer-reviewed journals including Art History, The Art Bulletin, Renaissance Quarterly, and The Sculpture Journal. At present, she is completing two books, one entitled The Sound of Marble: The Materiality and Immateriality of Italian Renaissance Art, which will be published by Cambridge University Press, and a second entitled Photography and Sculpture, which will be published by Reaktion Books. She has been commissioned by Wiley-Blackwell to edit a major anthology, A Companion to the Theories and Methods of Art History, and she has also edited a forthcoming volume entitled Crossing Continents: Exile and Expatriate Histories of Art. Future projects include De-Facing the Portrait: The Early Modern Body in Parts (a monograph with Professor Tatiana String) and an historiographical study entitled Art History’s Images. She recently co-organised an international conference, Photo Archives: The Place of Photography, which forms the basis of a co-edited (with Deborah Schultz) volume to be published by Bloomsbury. Finally, she has served as a consultant for a major Anglo-Italian television drama series, Medici: Masters of Florence (series two).

The Apparatus of Art History

Some of her publications can be accessed via the academia.edu website.