On 11 January, 2021, our new Departmental Lecturer, Costanza Beltrami, contributed a talk to the Architectural History Seminar. 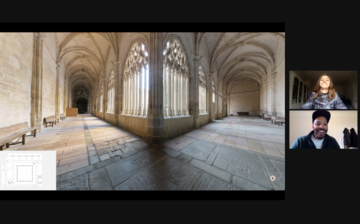 This seminar series, co-convened by our other new DL, Neal Shasore, is run by the Society of Architectural Historians of Great Britain (SAHGB),of which Neal is Honorary Secretary, co-supported by the Institute of Historical Research. Since the summer, and for the duration of the lockdown, they have teamed up with the longstanding Oxford Architectural History Seminar for a virtual 'super seminar.' With over 4000 sign-ups since June, the SAHGB's virtual programme reaches ever larger audiences globally. These events are free to attend and open to all. Details of future events will be published in the coming weeks, and will include a series of specially-commissioned articles, talks and seminar papers for LGBT History Month (February) - featuring a discussion led by Prof Ben Campkin on trans spatial histories and heritage - and Women's History Month (March) - featuring a collaborative event with SAH (US) for International Women's Day convened by Dr Elizabeth Darling.

Costanza’s presentation discussed the long history of the cloister of Segovia cathedral, first erected in the fifteenth century. Shifting her analysis from the cloister’s construction to its conception and relocation, she addressed such issues as collaboration, competition and conservation. Her paper revealed that the history of this cloister has never been static, involving complex processes of inheritance, modification and critique. 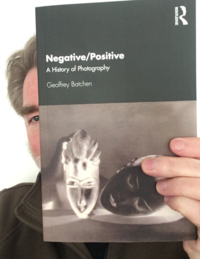 Geoffrey Batchen has just had a book issued by Routledge. As its title suggests, Negative/Positive: A History of Photography begins with the negative, a foundational element of analog photography that is nonetheless usually ignored, and uses this to tell a representative, rather than comprehensive, history of the medium.The fact that a photograph is split between negative and positive manifestations means that its identity is always simultaneously divided and multiplied. The interaction of these two components was often spread out over time and space and could involve more than one person, giving photography the capacity to produce multiple copies of a given image and for that image to have many different looks, sizes and makers. This book traces these complications for canonical images by such figures as William Henry Fox Talbot, Kusakabe Kimbei, Dorothea Lange, Man Ray, Seydou Keïta, Richard Avedon, and Andreas Gursky. But it also considers a number of related issues crucial to any understanding of photography, from the business practices of professional photographers to the repetition of pose and setting that is so central to certain familiar photographic genres. Ranging from the daguerreotype to the digital image, the end result is a kind of little history of photography, partial and episodic, but no less significant a rendition of the photographic experience for being so.

This book represents a summation of Batchen’s work to date, making it be essential reading for students and scholars of photography and for all those interested in the history of the medium. 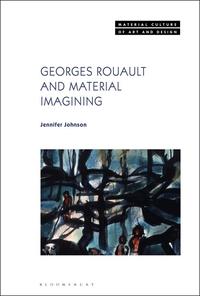 Jennifer Johnson, who received her PhD from History of Art at Oxford in 2014, has just published a book with Bloomsbury based on her doctoral thesis. The book, Georges Rouault and Material Imagining, is a reappraisal of the work of an artist who has tended to dwell on the margins of modernist art history. Often described as a difficult and dark painter, Johnson shows us that Georges Rouault's oeuvre is in fact deeply experimental. Images of the circus emerge from a plethora of chaotic marks, while numerous landscapes appear as if ossified in thick paint. Georges Rouault and Material Imagining approaches Rouault in relation to contemporary theories about making and material, examining how he constructs a 'material consciousness' that departs from other modern painters. Rouault's work explodes the genre of painting, drawing upon the residue of Gustave Moreau's symbolism, the extremities of Fauvism, and the radical theatrical experiments of Alfred Jarry. The repetitions and re-workings at the heart of Rouault's process defy conventional chronological treatment, and place the emphasis upon the coming-into-being of the work of art. Ultimately, the process of making is revealed as both a search for understanding and a response to the problematic world of the twentieth century. Georges Rouault and Material Imagining therefore offers an innovative critical approach to the various questions raised by this difficult modernist. 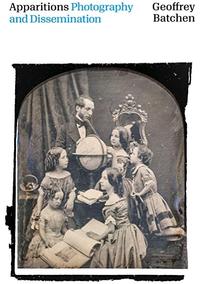 Geoffrey Batchen’s book, Apparitions: Photography and Dissemination (Power Publications and NAMU, 2020), has been awarded the ‘best book’ prize for 2020 by the Art Association of Australia and New Zealand. The judges described the book as follows:

An original, convincing and extensively researched book that may change the discipline’s understanding (in art history / photography history / critical theory / museum curating) of the complex processes involved in some of the earliest forms of commercial photography. This path-breaking study challenges photography history’s existing narrative paradigm that “privileges the singular photograph” over “the reproducible photographic image”. Batchen traces the genesis of certain early portrait daguerreotypes and their ‘transfiguration’ through engraving and lithographic printing, producing ‘ghost’ images that necessitate revaluations of both vintage photographs and their reproductions. Judiciously illustrated and with a contemporary feel, this book is constructed as a visual artefact of 2019. 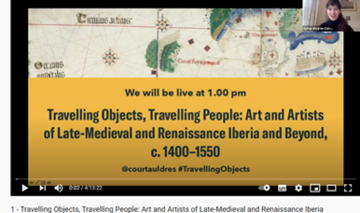 fifteenth-century Iberian art and architecture were transformed by the arrival of artists, objects and ideas from France, the Low Countries, and eventually Renaissance Italy, while 1492 marked a chronological rupture and the beginning of global encounters. Challenging these perceptions, the conference revisited the dynamics of artistic communication in late medieval Iberia, placing the peninsula in a global network, from Flanders to Florence, from Madeira to Santo Domingo. Bringing together contributions from international scholars working on Spain, Portugal and a range of related geographies, it addressed the impact of ‘itinerant’ artworks, artists and ideas, and investigated moments of encounter, conflict, and non-linear transfers of materials, techniques and iconographies.

Travelling Objects, Travelling People was convened by Costanza Beltrami (Departmental Lecturer in the History of Art), and Sylvia Alvares Correa (DPhil candidate in History of Art). It featured contributions by established and early-career speakers from seven different countries. The Portuguese scholar and curator Fernando António Baptista Pereira delivered the keynote lecture, Importing Painting, Sculpture and other artistic objects from the Low Countries to Madeira during the Cycle of the ‘White Gold’. 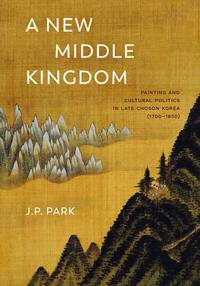 J.P. Park has won the 2020 Charles Rufus Morey Book Award, a prize given by the College Art Association in the United States to honour "an especially distinguished book in the history of art, published in the English language.”

J.P. Park’s A New Middle Kingdom: Painting and Cultural Politics in Late Choson Korea (1700– 1850) marks a milestone in the scholarship of the history of Korean art and the arts of modern East Asia more generally. Challenging long-held nationalistic generalizations about late Chosŏn dynasty art, Park breaks ground by placing the new visual program of true-view landscape and genre painting in its social context, connecting it to interregional artistic and cultural dialogue between Korea and her neighbors China and Japan.

This deeply learned, impeccably produced, lucidly written, and eminently readable book surveys Korean painting from a period of unprecedented economic prosperity, deftly positioning it within debates about national sovereignty, social order, and class identity. With a focus on changing conventions for landscape and genre painting, Park tackles topics of broad interest and significance, such as the relationship between art and “everyday” life, visual culture and literature, travel and personhood. Park makes the convincing case that painting in the late Choson dynasty has much to teach us about the history of art in China, Japan, and Europe, expanding our entrenched understanding of vectors of “influence” to illuminate the active resignification of sources, theories, and motifs in a rapidly changing world. Daring in his approach to questions of method, Park analyzes paintings for what they actively obscure as much as for what they manifestly show. By reading these images against the grain, and with diplomatic yet persuasive prose, he expands our understanding of what pictorial “evidence” may reveal, thereby opening up the study of Korean art to new audiences and offering productive avenues for cross-cultural comparison and exchange.

A statement in response to Black Lives Matter

The History of Art department joins with the rest of the university and the wider community in expressing its anger and sorrow over the recent racial violence we have all witnessed in the United States. That sorrow is joined by frustration that the spectre of racism continues to haunt the United Kingdom, in word and deed, leading to fear and prejudice and denying equal opportunities to many in our society. This is a moment when we all need to reflect on our own complicity in the current state of affairs, and actively seek ways to demonstrate our tolerance and respect for difference and diversity.  As a department, we need to ensure that both our recruitment procedures and our teaching embrace that diversity and ensure fairness for all. As art historians, we need to think about how our own practices address themselves to these same issues. Representation is a key issue in both propagating racism and advocating for justice. In this context, our skills in analysing images and debating their meanings and significance have never been more crucial. The questions we ask in our research, and the ways in which we engage with and listen to others, manifest within the microcosm of academia the kind of society in which we would all like to live.

The Department of the History of Art mourns the loss of its great friend and invaluable colleague Dr Jon Whiteley, who died on 16 May. A renowned scholar of French art, Jon spent most of his professional career in a curatorial role at the Ashmolean Museum. Jon’s knowledge and love of the collections of Western Art ran very deep. His last major publication, a catalogue of the Ashmolean’s French paintings since 1800, will be published next year. Alongside his scholarship, Jon was also an extraordinary communicator and teacher. His early formation as an Oscar-winning child actor in films remained evident, as he held diverse audiences rapt in front of paintings in the Museum. (The Bodleian Library catalogue contains not only his many learned publications but some of the films in which he starred, including Hunted (1952, with Dirk Bogarde), Moonfleet (1955, directed by Fritz Lang) and The Spanish Gardener (1956, again with Bogarde).) In talks unlike any others in the genre, he would deliver orations of beautiful and memorable clarity.

Jon believed strongly in the teaching role of the Museum, and he inducted numerous undergraduates into the world of nineteenth-century French art. His pupils learned unforgettable lessons in the value both of close looking at images and of critical attention to the language of contemporary criticism. The rigour of his teaching set an admirable if at times daunting example; but his underlying kindness and sense of humour were always close to the surface. His inspirational guidance, combined with his invariably dapper appearance, gave him a cult status with his students.

He had taken his first degree in history at Oxford, progressing to study the history of art with Professor Francis Haskell. Haskell was a model of the art historian who combined an attentive eye for the artwork with extensive archival research and an interest in the social context of art. Together with Haskell, Jon and his wife, Linda, herself a scholar and teacher in the same field, taught several generations of graduates taking the Diploma in Art History which preceded the Master’s degree,  contributing a significant chapter to the long story of the history of art in Oxford University.

With the foundation of the BA degree in the History of Art in 2004, Jon and Linda became significant collaborators with the expanded Department. Both have contributed to the shaping and delivery of the new syllabus, and have been unfailingly generous in their supervision and guidance of both undergraduate and graduate students. Fortunately for the Department, Linda continues her connection as a Research Associate. In the context of art history in Oxford, the two have stood for a combination of historical research with close attention to the object of study which leaves an important legacy – one to be treasured.