The Terra Lectures in American Art 2021

The Terra Lectures in American Art: Performing Innocence: US Artists in Paris, 1865-1914

Between the end of the US Civil War and the start of World War I, thousands of American artists studied and worked in Paris. While popular thought holds that they went to imbibe culture and attain artistic maturity, in this four-part lecture series, Professor Emily Burns explores the various ways that Americans in Paris performed instead a cultural immaturity that pandered to European expectations that the United States lacked history, tradition, and culture. The lectures chart knowing constructions of innocence that US artists and writers projected abroad in both art practice and social performance, linking them to ongoing conversations about race, gender, art making, modernity, physio-psychological experience, evolutionary theory, and national identity in France and in the United States. Interwoven myths in art and social practice that framed Puritanism; an ironically long-standing penchant for anything new and original; primitivism designed by white artists’ playing with ideas of Blackness and Indigeneity; childhood’s incisive perception; and originary sight operated in tandem to turn a liability of lacking culture into an asset. In analyzing the mechanisms of these constructions, the lectures return to the question about the cultural work these ideas enacted when performed abroad. What is obscured and repressed by mythical innocence and feigned forgetting?

Why did terms like innocence, naïveté, and artlessness have currency for US artists working in fin-de-siècle Paris? This lecture examines the language employed by artists and critics that applied these terms to Franco-American art exchange. Professor Burns traces the concepts’ emergence and expansion at the end of the US Civil War. Linking the mass exodus to France for study to attempts at cultural rejuvenation, innocence reveals a culture triggered by the realities of war, failed Reconstruction, divisive financial interests, and imperial ambition. The impossibility of innocence gave the myth its urgency and paradox. Engaging with artists from Thomas Eakins and Robert Henri to writers Mark Twain, Henry James and Edith Wharton, as well as journalists, the lecture frames the definitions and stakes of claiming to be innocent and naïve in Paris. In performing these characteristics, these artists and writers built an idea that American culture was belated compared with Europe; the lecture contextualizes this idea of strategic belatedness alongside similar projections in other emergent national contexts.

Visual culture representing Americans in Paris often polarized stereotypes of French and US identities, framing French bohemia as distinct from steadfast US work ethic. This lecture analyzes how Americans and US institutions in Paris adopted the ideal of the Puritan as a symbol of their sustained connection with the United States and a protective armor from becoming absorbed into Parisian decadence. US churches in Paris—all Protestant—participated in this construction alongside offering critiques of Catholicism in the context of debates about laicization in France. Professor Burns analyzes paintings, sculpture, and illustrations by Julius LeBlanc Stewart, Cecilia Beaux, Augustus St. Gaudens, and Jean André Castaigne, and studies St. Luke’s Chapel, which was built for the US students in Paris, to argue that this discourse inflected US artists’ representations of their studio spaces; the rhetoric of US artists’ clubs in Paris; and limited professional possibilities for US women artists.

Projections of different ideas of innocence became entangled in the representation of Black US character in fin-de-siècle Paris. By pairing new research on blackface minstrelsy and painter Henry Ossawa Tanner in the American Art Association of Paris with the displays of Blackness curated by Black intellectuals in the “Exhibit of American Negroes” in the Paris Universal Exposition of 1900, Professor Burns argues thatAmerican minstrelsy in Paris built a racialized “primitive” identity that caricatured Black men as effeminate and emasculated, while the latter exhibit constructed innocence grounded in claims of youth, newness, and incipient culture. While the curators staunchly and effectively rejected narratives of primitivism, these tropes of the new simultaneously paralleled and reinforced performances of cultural innocence in the largely white US community in Paris.

French artists often referred to US artists and art as their offspring. In the context of French declining birthrates, cultural fecundity absorbed anxieties about a decline of French culture. The final lecture analyzes how US artists in Paris took up the child as a motif and mantra that reinforced or rejected the narrative of French artistic parentage. While Edwin Blashfield and Henry Ossawa Tanner, both artists invested in the French academy system, framed dutiful tutelage, Mary Cassatt, Cecilia Beaux, and Ellen Emmet Rand instead probed burgeoning ideas in psychology about the child to frame independent and precocious children. These modern children modeled artistic independence echoed in these painters’ aesthetic experimentation, mirroring the conceit framed by Henry James’s depiction of his child character in What Maisie Knew as “flattening her nose upon the hard window-pane of the sweet-shop of knowledge.” Cartoons related to the War of 1898 suggest the fungible nature of this position; while playing youthful in the context of Europe, Americans adopted the aged Uncle Sam in rendering their colonized subjects as the children as they moved to outgrow their longstanding dependence on Parisian art practice. 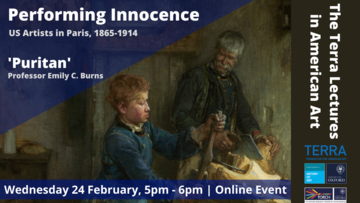